‘In Bed With Gore Vidal’ was nominated for a 2014 Lambda Literary Award in the Best Gay Memoir/Biography category.

“Teeman’s biography of Gore Vidal is the perfect combination of racy gossip — from steamy celebrity liaisons to hustlers in Rome — and penetrating analysis. It shows how a complicated attitude to sex and sexuality shaped an author’s life and work. An original, intriguing and necessary portrait of an American icon.”

“Throughout his literary career, Gore Vidal frequently delivered lofty, if sometimes specious, pronouncements on sexuality (‘There are no homosexuals, only homosexual acts’) and constructed an elaborate sexual myth about himself. Tim Teeman’s energetically reported and deliciously readable bio clarifies Vidal’s portrait without diminishing him. It may not be quite the biography Vidal wanted, but it’s the one he was asking for.”

“Tim Teeman addresses some of the most fascinating questions about Gore Vidal, including how he identified himself. Was he gay? Bisexual? Why did he have a problem with the idea of sexual identity while campaigning for equal rights? Teeman not only gives us lots of rich detail on Vidal’s life and loves, contrasting his private and public lives; he helps us to see how Vidal actually embraced being gay in unexpected ways. This is a timely and riveting account of a man who, perhaps unwittingly, contributed enormously to the movement for equal rights, as well as offering a blueprint for how LGBT people are viewed by others and view themselves.”

“Sex with hustlers and Hollywood stars—for all his insistence that sexuality did not define him, Gore Vidal sure got around. And while he didn’t hit the streets with placards, he was still, in many ways, a gay rights revolutionary. Tim Teeman’s biography, full of new material and interviews, reveals how Vidal’s sexuality and sex life influenced his life and his work — and tells, for the first time, the moving story of his last years. With deftness, wit, intelligence, and a journalist’s nose for a good story, Teeman pulls back the curtain on an American icon. It seems Gore Vidal can still surprise us. What a page-turner!”

Scotty Bowers
Author of ‘Full Service: My Adventures in Hollywood and The Secret Sex Lives of the Stars’

“Gore Vidal was a good friend for over sixty years. If you want to know who Gore really was, read In Bed with Gore Vidal, which uncovers, and evokes, his complicated private life and how that influenced his wider life, writing and politics. Lost loves, sex with hustlers, a life with Howard Austen, his relationships with women and the truth about his sexuality: this is a juicy, intelligent and honest portrait of a dear friend and exceptional writer and man.” 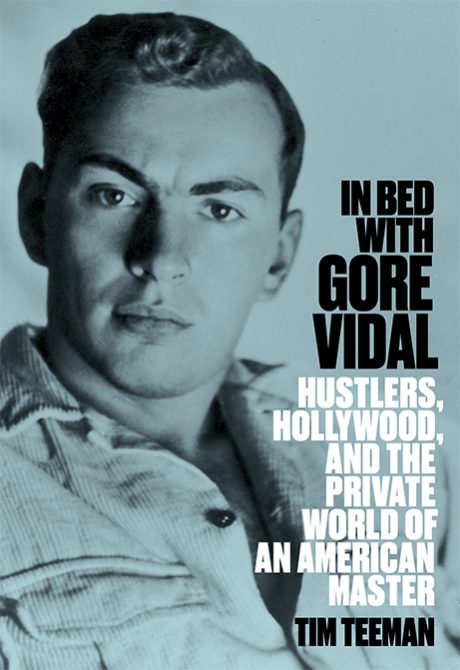